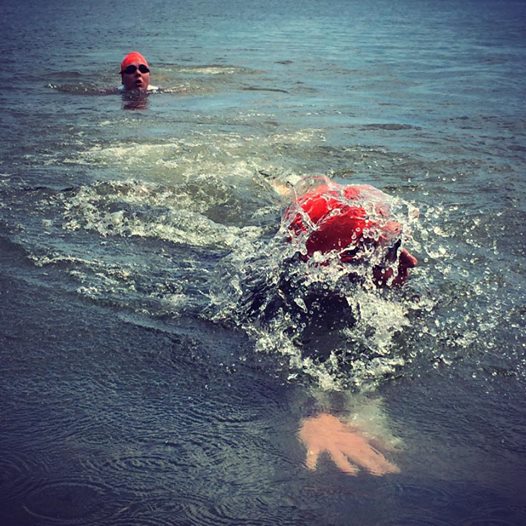 It was surprisingly cool for a summer morning in Toronto as I made my way to the edge of the pier with about a hundred other triathletes. We had heard it was going to be a chilly swim, but it wasn’t until I dipped my toe that I realized my wet suit wouldn’t shut out that kind of cold.

There’s really no way to prepare for the uncertainty at the start of a triathlon. It’s controlled chaos much like salmon swimming up stream; the best thing you can do is to stay fearless, totally present, and trust that you’re not going to get kicked in the head!

The air horn was sounded and there was no turning back – I was submerged into the chills of Lake Ontario with frantic splashing all around me. A feeling of regret washed over me, “Why on earth do I do this?” For a few seconds I considered flagging down the lifeguard and grabbing on to the paddleboard for dear life, but thankfully my pride wouldn’t allow me. I swam on…

“Why is this so difficult?” I asked myself. “What’s wrong with you? You should have trained harder. That guy is passing…you are never going to be able to keep up!”

An amazing thing happened to me in the frigid waters of Lake Ontario. I began to hear the negative self-talk in my head and realized how destructive it was. As a coach, if I used those words with my clients, I wouldn’t have a job! How could I have endless capacity for compassion and encouragement for others, but so little for myself?

I made a pact with myself in that very moment to change the dialogue. For every 30 strokes I would say something encouraging to myself. And so I began…

“You’re killing this, Dave! You have trained really hard for this race. If you can handle this, what else are you capable of?” It felt weird, at first, maybe even self indulgent, but with each stroke I started to pick up speed; my breathing became more intentional, my stroke more powerful. “You can do this, keep it up!” I settled into the moment and saw the shore approaching more quickly. The tides had turned; I was competing with myself not against myself.

But this was not a time for overconfidence! There was still a challenging cycle course and long run ahead of me, but with this newfound skill of care and self-compassion, I had broken the shackles that we’re weighing me down and holding me back.

I didn’t win the race, and I still go to war with my inner voice, but I feel as though I have won the battle. I have a deeper awareness and have begun to replace the harsh self-doubting talk with kindness, and self-encouragement.

Does this sound familiar? That negative self-talk is the same voice that can stunt the growth in your career. We compare ourselves to the next guy. We analyze how we are not good enough. We convince ourselves that we are fighting a battle that we will never win.

What does your inner voice tell you?

What would it feel like to be your own biggest fan?

What would it take to change your story?

Whether you’re an athlete or a corporate superstar, getting a coach can be a great first step for setting goals, mapping your course and realizing your ultimate potential.

Rewriting the script is up to you!